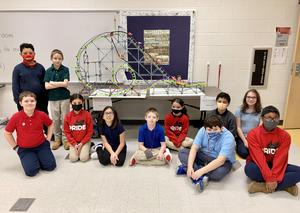 Grade 4 students spent a month building their Kinex roller coaster with Catalyst Ministry volunteer, Neal Nelson.
From Neal Nelson:
The roller coaster that they built was over six feet long and three feet tall.  There were over 3,200 pieces involved in the construction.  The pieces were not labeled in any way.  There were different shapes and colors, but there were multiple shades of the different colors and the pictures were usually not clear enough to differentiate which size to use.
The 80 pages of instructions were isometric projections of a 3D sub-assembly as a 2D illustration.  In these projections, a stick item can look like it is going into the page page or coming out of the page, depending on your perception of the object / drawing.  There were no detailed word instructions on what to do, just the illustrations and greyed out main assemblies that the sub-assembly would be attached to.  After a few times working with this style of instruction, the students quickly adapted and applied what they had experienced and learned earlier, to their task that day.
Many students in the building routinely followed their progress, turning this into a school wide project.  The students from classrooms around the pod definitely checked the progress each day, as did several ELD students and others around the school.  Teachers from other areas of the school, on occasion, brought their entire class to see what was going on.  It brought smiles to everyone's face and elicited numerous excited "oohs" and "aahs" from the students.
The students involved worked in groups of four consisting of two teams of two.  Their team work progressed during the project and at times there were teams assisting other teams.  One team sometimes volunteered to help the other team with a problem and sometimes a team would ask another team to help them briefly.
The problem solving ability of all students involved definitely increased during the project.  The instructions were just pictures, and usually the pictures were not very obvious.  Two favorite examples are listed below.
A team was working with his partner on one of the more difficult sub-assemblies to that point.  It would not attach to the main assembly.  The team tried a few different approaches and looked at it for a while.  One student then asked, "Can I take this apart?" as he pointed to part of the main assembly.  I told him sure, so he did.  Then they could attach their sub-assembly after which they reassembled the pieces they had taken off.  WOW.  This was really going outside of the normal boundaries!  This process of critically looking at the problem and then developing an unusual approach, eventually made its way into most of the teams.
The second example involved a team with one of the most complex sub-assemblies that was very unclear.  They worked hard just to get the pieces together into any kind of assembly.  Many times they had to step back to answer the question "Does it look right to you", and then modify it until it did.    Attaching it was an even bigger problem.  They struggled a lot and initially wanted an answer from me on what to do.  Eventually, one student excitedly called me over and told me that she had decided to use the "Crazy part of her brain." (outside of the box thinking in my terminology) and moved a piece and then it fit.  She was so excited that she had to go and tell Mrs. Davis right then and there what she had done.  It was a huge step forward for her as she had definitely been an inside the box thinker.